Come be my light 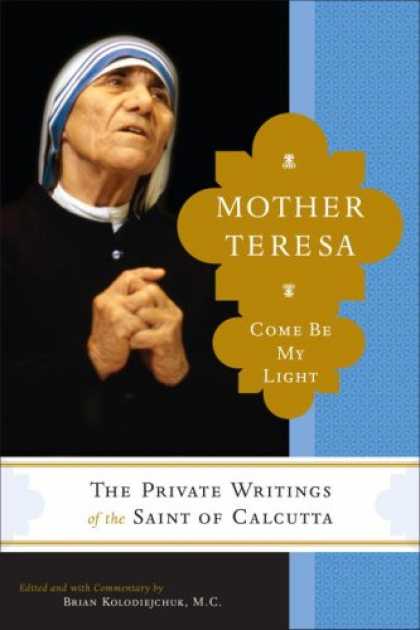 Here is an excerpt from the end of Come be my light, the private writings of Mother Teresa of Calcutta. As the editor comments, it's a beautiful story she tells here and one which illustrates her entire life. What's particularly powerful to see is the link between love and light. Mother Teresa, one of this world's greatest lovers, was called by Jesus to "be his light" and in this passage she describes a simple act of love, reaching out to someone and not just waiting for people to come to us, actually as a powerful light... the light of love... a love which tells the person the radical truth that they are loveable, desired, chosen and beautiful, instead of the lie that they are cheap, empty, worthless or merely superficially beautiful or valuable. Lets not forget this amazing capacity we have to love really, to seek out the poor, the lonely, the abandonned... to be God's light, He who made man in His own image.

“In a book resonating with Mother Teresa’s voice it seems appropriate to grant her the last word. The following is a story she told that wonderfully expresses the heart of her life and mission. It also invites each one to “be His light” by partaking in these humble deeds of love and compassion that may seem insignificant but are, in fact, nothing less than the means of radiating God’s love to each person we meet, thus transforming, little by little, the darkness of the world into His light:

I will never forget the first time I came to Bourke and visited the sisters. We went to the outskirts of Bourke. There was a big reserve where all the Aborigines were living in those small shacks made of tin and old card-board and so on. Then I entered one of those little rooms. I call it a house but it’s only one room, and inside the room everything. So I told the man living there, “Please allow me to make your bed, to wash your clothes, to clean your room.” And he kept saying, “I’m alright, I’m alright.” And I said to him, “But you will be more alright if you allow me to do it.” Then at the end he allowed me. He allowed me in such a way that, at the end, he pulled out from his pocket an old envelope, and one more envelope, and one more envelope. He started opening one after another, and right inside there was a little photograph of his father and he gave me that to look at. I looked at the photo and I looked at him and I said, “You are so like your father.” He was so overjoyed that I could see the resemblance of his father on his face. I blessed the picture and I gave it back to him, and again one envelope, second envelope, third envelope, and the photo went back in the pocket near his heart. After I cleaned the room I found in the corner of the room a big lamp full of dirt and I said, “Don’t you light this lamp, such a beautiful lamp. Don’t you light it?” He replied “For whom? Months and months and months nobody has ever come to me. For whom will I light it?” So I said “Won’t you light it if the Sisters come to you?” And he said “Yes.” So the sisters started going to him for only about 5 to 10 minutes a day, but they started lighting that lamp. After some time he got into the habit of lighting. Slowly, slowly, slowly, the Sisters stopped going to him. But they used to go in the morning and see him. Then I forgot completely about that, and then after two years he sent word - “Tell Mother, my friend, the light she lit in my life is still burning.”

Come be my light